The Red Suit: How a Chaplain Helped His Patient See Care Like No Other


This Faces of Caring blog post submitted by Mountain Valley Hospice & Palliative Care demonstrates how a chaplain went above and beyond to care for patient, forming a strong bond that lasted even after the patient died. 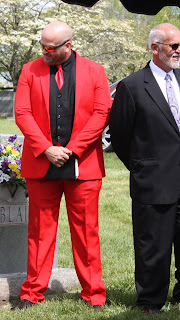 For many individuals, memorial services call for dark colors, with attendees often wearing black. But at one particular gathering in April, the color of choice was red. Red flowers, red shirts worn by pallbearers, red words read from the Bible, and in the middle of all this, a chaplain sporting a bright red suit.

The chaplain, Jonathan Casstevens, had long planned to wear the suit in loving memory of the patient, Ada Branson. It was his way of honoring Ada, who suffered from a form of blindness that allowed her to see only one color, red.

Upon her admission, Ada expressed she did not want a chaplain. However, at the family's request, Jonathan stopped by one day to talk with Ada, not as a chaplain but as a supportive member of the hospice team. He and Ada immediately enjoyed each other's company. "She was laughing, I was laughing," he recalled. "We had a great time together."

At the end of their initial meeting, Jonathan told Ada to let her nurse know if she wanted him to return. Her response was straightforward: "Oh, you're coming back," she told him that day. "Can you come back tomorrow?"

Jonathan obliged Ada's request by visiting every two weeks. Serving as her chaplain, he provided spiritual support for any questions or concerns she had. He learned that Ada had a type of blindness that allowed her to see only the color red. To accommodate her disability, Jonathan ordered two bright red long-sleeved shirts. "Everybody on our team knew, if I was wearing red, I was going to see her," Jonathan said.

As the seasons passed, Jonathan was able to minister to Ada during times good and bad, including deaths in her family. Those times strengthened their bond and friendship.

On Valentine's Day, Jonathan gave Ada a large bag of caramel candies marked with the familiar red Bulls-Eyes brand. During that visit, the 95-year-old confided in him a special request: she wanted him to speak at her memorial service. Jonathan agreed to it and added a promise that he would wear a red suit that day, as a tribute to her.

On April 18, Jonathan received the news he had been dreading. Ada, his beloved patient and friend, had died. Because of the COVID-19 pandemic, Ada's memorial service had a limited gathering of her closest family. Among that select group of loved ones was Jonathan, standing by her graveside, wearing the red suit he promised her.

"Honestly, it's a one and done suit," Jonathan said. "That was her suit. People didn't think I would wear it. But I was so honored to be able to serve her as her chaplain, but more importantly as her friend. I did it to keep my promise to her, to show her how much I loved her, and to honor and cherish her memory."

"My goal as a chaplain is to show the person I serve, and their family, the love I would want my mom and dad to experience if they were in our care," Jonathan concluded. "If you really love what you do and you love the people you serve, they become your family."

The Faces of Caring campaign was created for hospice and palliative care professionals to share their experience providing care during the COVID-19 pandemic. If you would like to share your photos and stories from the front lines, please go to www.nhpco.org/faces-of-caring.
Posted by NHPCO at 10:04:00 AM