Many in the U.S. hospice community are familiar with Mor’s work from the mid-1980’s when he headed the National Hospice Study – the initial evaluation of the impact of hospice care under the then new Medicare hospice benefit – on the cost and quality of life outcomes experience by terminal care patients.  He continues to influence policy maker’s decision-making for hospice today.
Most recently, Mor and his Brown colleagues have documented large regional variation in hospitalization rates, including end-of-life transitions and the use of hospice and palliative care.
He has led contracted government projects related to aging and long term care such as patient outcomes in nursing homes and a national study of residential care facilities. Mor was one of the authors of the Congressionally mandated Minimum Data Set for Nursing Home Resident Assessment.
Mor has been principal investigator of nearly 30 NIH-funded grants as well as awards from the Robert Wood Johnston Foundation, The Commonwealth Fund, and other private foundations.
Mor was presented with the Distinguished Researcher Award by NHPCO President and CEO J. Donald Schumacher, PsyD, at the Friday morning conference plenary session where more than 1,000 hospice and palliative care professionals are gathered to explore innovation and excellence in clinical end-of-life care delivery.


“For thirty years, Vincent Mor’s research has focused on the impact of health care services on quality of care and outcomes for frail and chronically ill patients and his many contributions have improved the care many people have received,” said J. Donald Schumacher, NHPCO president and CEO. “One of the most important things we as a professional community can do is to shine a light on individuals who have contributed much to the work we are doing to care for those at life’s end.”
The Distinguished Researcher Award was created by NHPCO to recognize an outstanding body of research that has contributed to the enhancement of hospice and palliative care. 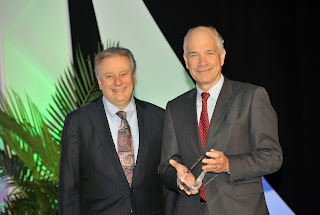 The misconception that pain is a natural part of aging or illness and those who suffer must live with it is a common myth that leaves millions of people in pain every day. There is almost always a reason why a person is experiencing pain and in most cases physical pain can be managed.

Hospice and palliative care professionals—experts in helping patients and families cope with pain—know from experience that pain can take away peace of mind, comfort, enjoyment, and most of all hope.

September is National Pain Awareness Month and helping people learn the truth about pain and what can be done to manage pain is the focus of the National Hospice and Palliative Care Organization’s campaign, LIVE Without Pain.

“When someone is in pain, it can be impossible to think about anything else,” said J. Donald Schumacher, NHPCO president and CEO. “Pain can make it difficult for you to work, sleep, maintain relationships with friends and loved ones and participate in simple activities.”

Physical pain is only one aspect of suffering.  Emotional and psychological suffering is also an important factor that must be considered.

“Good pain management improves quality of life and in most cases it is possible to manage pain and that’s why we want to increase public awareness about the issue,” explained Schumacher.

Some advice from professionals who help patients and family caregivers deal with pain:


·         In order for the doctor or other healthcare provider to determine the best way to control pain, they rely on what patients and family caregivers tell them, so communication is important.


·         Pain in older adults, just like pain in any other age group, is the body’s way of saying that something needs attention. Pain is a signal that it is time to talk with a doctor or other caregiver and seek help.


·         Pain associated with a life-limiting illness or at the end of life requires special attention and can best be treated by a palliative care or hospice provider.

LIVE—Without Pain resources are available free-of-charge from NHPCO’s Caring Connections at  www.CaringInfo.org/pain. You can learn about different kinds of pain, caring for someone in pain, talking with your physician, managing medications and more.

Royalties from New Book by Judith Fox to Benefit Hospice


On September 3, a new book was released by the award-winning photographer and author, Judith Fox. One Foot Forward: Stories and Faces of Widows and Widowers explores the poignant stories and portraits of 20 widowed women and men who have grieved and persevered in the face of losing their spouses to sudden death and chronic illness.

Fox is donating 100 percent of her royalties from this book to the National HospiceFoundation.

Fox comes to this topic from deep personal experience. She lost her first husband, Jerry, to an aggressive cancer in 1992, and for the past 15 years has cared for and advocated on behalf of her second husband, Dr. Ed Ackell, who was diagnosed with Alzheimer’s disease just three years after they married.
In 1998, after a successful career as a business leader and entrepreneur in both New York and Virginia, Fox returned to an earlier career in photography. Her first book, I Still Do: Loving and Living with Alzheimer’s, focuses on both her and her husband’s experiences with the disease and caregiving.
She explains the impetus for creating One Foot Forward:  “Because I was widowed before, it’s difficult not to think about the pain that I know is ahead of me when Ed dies. Writing One Foot Forward was a way to find some personal comfort as Ed’s life is coming to an end. I wrote the book that would have helped me and I hope will help others.”
“Death is an inevitable—and very difficult—part of life. But if we are fortunate enough to love and to have a significant relationship, one of the individuals in the relationship is eventually going to be widowed. So we might as well learn to talk about death and grief, and understand what it’s like to live through,” said Fox.
Fox selected NHF as the recipient of her royalties because she believes in the hospice and palliative care mission and wants to support work at the national level. She notes further, “Both my parents benefited from hospice care and my husband is currently being helped—as am I—by compassionate people at The Elizabeth Hospice in San Diego.”
“We are overwhelmed at Judith’s generosity and commitment to support the work of the National Hospice Foundation,” noted J. Donald Schumacher, NHF president and CEO.
To learn more about Judith, her new book, One Foot Forward, and her other works, visit www.judithfox.com.


To order her book and support NHF, see One Foot Forward on Amazon.com. 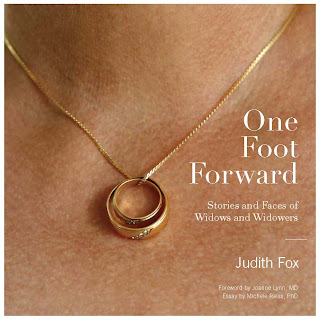