Yesterday (12/16/13), Congressmen Tom Reed and Mike Thompson sent a letter to Marilyn Tavenner, the Director of the Centers for Medicare and Medicaid Services (CMS). The letter urged CMS to slow down on their recent initiatives regarding Part D and hospice (read this letter online).

This is a direct result of the Hospice Advocacy from the our provider community. The letter contained signatures from 42 Members of Congress from the House of Representatives. Of those 42, two were physicians, and most notably 14 were on the House Ways & Means Committee.

Why does this matter? The Ways & Means Committee has jurisdiction over Medicare issues, including hospice. Ways & Means members can be reluctant to sign on to letters of this nature, but your grassroots relationships coupled with the seriousness of the issues surrounding hospice and Part D were enough to overcome that/ Congratulations are in order for the entire hospice community.

What happens next? The hospice community has now very publicly weighed in on this issue, and (with your help) so has Congress. CMS is currently accepting comments on their draft memorandum through January 6, 2014. NHPCO is collecting case studies of how this guidance would affect hospices. If you are an NHPCO member, please submit comments to regulatory@nhpco.org.

NHPCO and its affiliate organization, the Hospice Action Network, is monitoring several year-end issues here in DC including the ‘SGR’ packages, the budget agreement, and this Part D issue, among others.

Our  work as the voice of hospice on Capitol Hill will continue, and we - along with Hospice Advocates and our supporters - will keep fighting for increased access to hospice care in the United States.

NHPCO's 2014 Innovation Forum is a special event being held in Miami on January 21-23, 2014 that will allow participants to discuss challenges in the field, look at issues of relevance and explore possible solutions and practical models.  The intimage nature of the forum will allow a lot of discussion and networking with other participants.

Also, it's an ideal time to escape the winter weather and enjoy the Florida sun while networking with professional colleagues and discussing end of life care.

You now have until December 15 to register for the Innovation Forum at the early-bird registration rate. 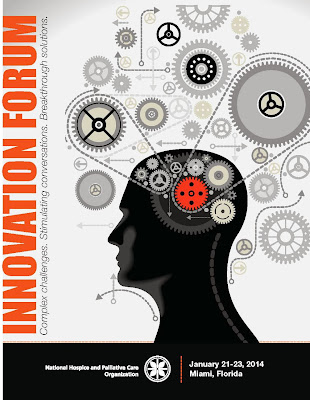