A new report released by the National Hospice and Palliative Care Organization provides insight into the care needs of young people who might benefit from pediatric palliative/hospice care.  These are children with chronic, complex and/or life-limiting conditions.

The 11-page report, “NHPCO Facts and Figures: Pediatric Palliative and Hospice Care in America,” can help hospice and palliative care providers—as well as policymakers, funders and the media—to better understand both the current challenges and the unmet needs of children and their families across the country.


Pediatric palliative/hospice care provides children and their families with high quality, compassionate, and consistent care delivered through the collaborative efforts of an interdisciplinary team. PP/HC may be provided along with concurrent disease-modifying therapy and can transition to be the main focus of care when disease-modifying therapy is no longer effective and comfort becomes a priority.
Due to the complexity of care involved, children with life-threatening conditions and complex chronic conditions are likely to benefit from PP/HC services. The U.S. Department of Health and Human Services reports that the number of children with special health care needs in increasing. Overall, 15.1 percent of U.S. children ages 0 – 17 (11.2 million children) are in this category. 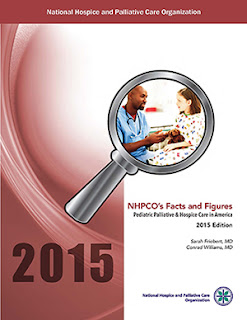 The award celebrates innovation in end-of-life care and the two programs honored this year demonstrate a commitment to providing palliative care services within the continuum of care along with outreach to traditionally underserved communities.

“The opportunity to learn from innovators in our field benefits all organizations providing hospice and palliative care services and the Circle of Life Award is a significant way for us to spotlight those innovative providers,” said J. Donald Schumacher, NHPCO and NHF president and CEO.  “These programs, who are both NHPCO members, serve as models for us all as we move forward in our shared goal of providing the highest quality of care for all those facing serious and life-limiting illness and we applaud Care Dimensions and hospice of Frederick County.”

The awards were presented at a ceremony at the American Hospital Association’s (AHA) annual summit in San Francisco on July 24.

Today, CMS announced the names of 141 organizations that will serve as demonstration sites for its Medicare Care Choice Model (MCCM). This list is available on the CMS website.

CMS originally anticipated selecting 30 Medicare-certified hospices for the project but given the overwhelming interest from the U.S. hospice community, the list of MCCM demonstration sites grew to over 140, many of which are NHPCO members. This will enable the model to provide care for up to 150,000 Medicare or dually eligible beneficiaries over the five year period.

The MCCM is an initiative developed by the Centers for Medicare & Medicaid Services to explore ways to improve care options for beneficiaries by allowing greater flexibility and choice “in deciding between hospice care and curative treatment, when faced with life-limiting illness.”

With the intention of improving Medicare beneficiaries’ quality of care and patient and family satisfaction, the MCCM will provide a new option for beneficiaries with advanced cancers, chronic obstructive pulmonary disease, congestive heart failure, and HIV/AIDS who meet hospice eligibility requirements under the Medicare hospice benefit, to receive palliative care services from  the hospice providers who have been chosen to participate in the model while concurrently receiving services provided by their curative care providers.

All supporters of hospice care in the U.S. are encouraged to contact their legislators July 14 through 16, 2015, as part of the hospice community's annual legislative event on Capitol Hill.

On July 14, nearly 300 Hospice Advocates, representing 48 states and districts, and every discipline in the Interdisciplinary Team, are in Washington, DC, visiting more than 400 Congressional offices to call for support of hospice.

Individuals across the country also can make a tangible difference for hospices by participating from their homes across the nation. Hospice Action Network and NHPCO are encouraging all hospice supporters to call their Members of Congress and take specific actions that will not only benefit the hospice community but allow hospices to better serve the people for which they care.

Advocates will be asking their Senators to support The Care Planning Act of 2015 (S 1549) designed to give people with serious illness the freedom to make more informed choices about their card, and the power to have those choices honoured. Additionally, Senators will be asked to join the Sign-on Letter written by Senators Roberts and Warner that calls for CMS to test hospice payment changes that were included in the FY2016 Notice of Proposed Rulemaking.

Members of the House of Representatives will be asked to co-sponsor The Hospice Care Access Improvement Act of 2015 (HR 3037) that was just introduced yesterday, July 13, 2015. This legislation calls for a one year testing period to ensure any payment methodology reforms proposed by CMS will be implemented with minimal unintended complications or consequences. The opportunity to test any system changes and conduct the necessary education and training would benefit CMS and the hospice provider community. The legislation also contains a number of program integrity provisions long-supported by the hospice community.

The Hospice Action Network has created an easy to use online "Click to Call" Campaign that will help people understand the issue and then connect them to their Congressional representatives. The whole process should take no longer than 30 minutes, start to finish- that’s all it takes for you to make a difference.
Posted by NHPCO at 11:33:00 AM No comments: