The Spring 2016 edition of NHPCO's NewsLine contains a number of articles that ask the question, "Are you serving all who might need your services?"

Readers are invited to read the latest issue of NHPCO's digital quarterly NewsLine (Spring 2016), where we take a look at issues involved in reaching communities under-utilizing hospice care, particularly Latinos and African Americans. We also share efforts of the NHPCO Diversity Advisory Council and some useful resources. 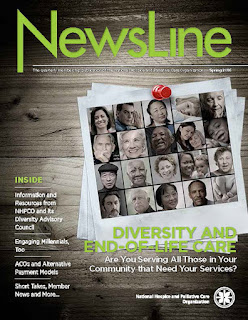 Program for the Love of Pets

Sharon Shinkle’s dogs, miniature Yorkshire Terriers named Shelby and Yogi, meant the world to her; they were a constant presence in her life.  In the beginning of 2016, Sharon began receiving hospice care and her illness left her unable to care for her beloved dogs leaving her feeling extremely distressed.  Her illness took a turn for the worse and she was admitted to the North Pinellas Care Center, part of Suncoast Hospice in Palm Harbor, Florida.  It was there that she expressed her concern for her dogs –temporarily staying with close friends- to her care team.  They were part of Sharon’s family. Luckily the organization has a Pet Peace of Mind program and was able to help Sharon, Shelby and Yogi.

Sharon shared her concern that the dogs hadn’t been groomed in some time.  Alicia Lawler, Senior Volunteer Coordinator and Pet Peace of Mind Program Coordinator assured Sharon  that PPoM would be able to get the dogs groomed.  She also took this opportunity to find out if Sharon had a plan for Shelby and Yogi after she died.

“Part of the Pet Peace of Mind program is to determine what happens next when a patient either can no longer take care of their animals or if they pass away,” says Alicia.

Sharon was very realistic about the time she had left and had arranged for her sister Diana to take the dogs after she died.  She was comforted knowing that Diana, who also has a miniature Yorkie, would be there for the dogs and give them the same love and care that she provided.

Sharon’s family arranged to have Shelby and Yogi visit her at the care center as often as possible. Her final visit with the dogs was filled with joy, laughter, and love.

A new video, "Program for the Love of Pets," is part of the Moments of Life: Made Possible by Hospice campaign which was created to help people understand the many things that hospice and palliative care can do.

Leading hospice volunteers is not just our job; it is our passion.  For me, it is essential to approach this very important work with passion – both for the reasons for which volunteers are needed, and especially for the gift that volunteers bring.  Thankfully, this is a very easy task, because undoubtedly we find – over and over again – that our lives are enriched by working with an awesome teams of volunteers.  Secondly, I’m encouraged to remember that those who commit to being a hospice volunteer are stating that they are willing to serve, without pay, to improve the quality of life for others.  And it is our privilege and responsibility, as leaders of volunteers, to come alongside these willing individuals with the passion and commitment they deserve.

Think about the gift!  Hospice volunteers have said – either to themselves or to us – that they are willing to walk with others on their end-of-life journey.  They are friendly visitors, holding the hand of a patient in a skilled nursing facility. They are envelope stuffers, assuring that those who are grieving receive valuable resources and support.  They are errand runners, picking up groceries for family members who just don’t have time to get away.  They are support group assistants, sharing their own walk of grief with others in a healthy way which helps them to navigate their own journey.  They are phone connections, assuring families that needed services and supplies are available exactly when and how needed.  They are fundraisers, championing your organization to have funds available to meet benevolent needs of patients and families.  They are vigil keepers, believing that no one should die alone and being there, day or night, simply to be a presence. They are Veterans, committed to honoring those at end of life who have served our country and protected our freedoms. They are teenagers.  They are retired. They are working people with very busy lives. They are all of this and more. They are givers – of time, of passion, of self.

To those of us who are leaders of volunteers – may we enjoy each and every day of our work, and recognize our work as the valued profession that it is.  Let us take time every day to thank a volunteer, to encourage them in their work. There is great joy in the successful leadership of volunteers. There is great joy in paving the way for others to be able to give from their hearts to those who are at end of life.  I am blessed… we are blessed! 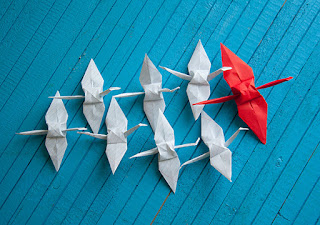 On Thursday March 31, 2016, the HHS Office of Inspector General issued a report on the use and misuse of hospice inpatient care in the Medicare Hospice Benefit. The study was undertaken as part of an ongoing effort at OIG to prevent inappropriate claims for hospice general inpatient care (GIP), including care being billed but not provided and beneficiaries receiving care they do not need.

As the oldest and largest leadership organization representing hospice and palliative care providers and professionals, NHPCO continues to welcome appropriate oversight of the field and works continually with its members to ensure their awareness of and compliance with all hospice related rules and regulations. NHPCO has also worked closely with Congress and CMS to promote policy changes that stem the abuses referenced in the report, and ensure a high quality hospice experience for consumers.

Specifically, NHPCO recommends that hospices:
NHPCO will continue to work with member organizations, policymakers, and other stakeholders to ensure that hospice claims are billed appropriately, and that beneficiaries experience high quality, compassionate care at the end-of-life.

See NHPCO's Regulatory Alert on the new OIG report for additional analysis and summary of the report.
Posted by NHPCO at 3:34:00 PM No comments: