In honor of Pride Month, Tracey Gregory, RN, QAPI/Education Coordinator at Hospice of Western and Central Massachusetts, reflects on some favorite memories of husbands Mr. D. and Mr. R., who both received hospice care.

Our hospice office, like many others, has a bulletin board full of thank you cards, staff events and patient pictures. Over my seven years with our agency, I have seen the compilation grow and the smiles of our patients and families bring back memories of compassionate care and amazing stories. One of my very favorite photos is of an elderly gay gentleman attending his first Pride parade, a rainbow fedora on his head and a huge smile on his face. 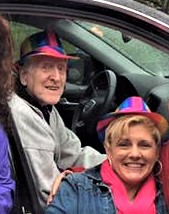 As a young man, he proudly served in the military, earning commendations for his achievements over the years. That came to a sudden end when he was called unexpectedly into his commander’s office. He was told that he was being discharged “due to homosexuality.” Mr D. had not yet identified as a gay man but was told his mannerisms were not in line with the military code. He was at first stunned, as expected, but he then made a call to a family member, with his usual wit, confidently stating, “Guess what? I’m no longer in the service and I’M A HOMOSEXUAL!”

Soon after, he met the love of his life, Mr. R. They both performed in “off-off-off” Broadway and vaudeville and had a rich 50 years full of love and adventures together. When Mr R. came on our hospice service, he would regale our staff with sometimes bawdy stories of their lives in the theater. Our staff were touched by the level of devoted care Mr. D. gave as he nurtured his dying husband, despite having ill health himself.

Within a few months of his beloved one passing, Mr. D. also came on our service. In coordinating his care, we attempted to assist him with accessing his military benefits only to find out that there was no record of his service. Not only had he been unfairly discharged because of his presumed sexual orientation, but his years of proud service had been erased and he was denied the right to his well-earned benefits. Sadly, incidents like this are not solitary. Our nearly 3 million LGBTQ+ elders have many similar stories to tell.

In his last months, Mr. D. expressed his “bucket list” wish: to attend a Pride parade. He shared that he spent most of his life hiding who he truly was and wanted to experience a place where he would free to be himself. So, his hospice nurse, along with LGBTQ+ friends and allies, decked him and themselves in festive rainbow attire and attended the local Pride parade. He had a fabulous time enjoying the festivities and sharing in the celebration. Toward the end, he teared up and shared how he was so moved that after all the years feeling the need to hide his true self, he could feel safe to be seen as a proud gay man and that he could be celebrated!

Mr. D. passed away soon after, less than a year after his cherished husband. Their stories of the good and bad times are still fondly remembered by our team and their love story is truly inspiring. I can just imagine them, reunited again, celebrating and shouting with pride, “I’M A HOMOSEXUAL!”