The Power of Forgiveness at End of Life

Care Dimensions chaplain Rev. Donna Spencer Collins, M.Div. shares her experience witnessing the importance of forgiveness and peace at the end of life -- both for the person doing the forgiving and the person who is being forgiven.

On the wall in my living room hangs a banner with this quote:

“If we have no peace, it is because we have forgotten that we belong to each other.”- Mother Teresa 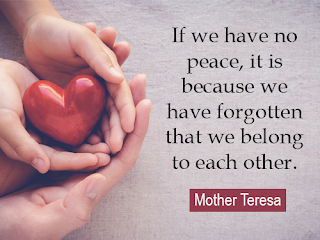 Through a series of unfortunate circumstances, my niece and nephew came to live with us. And not long after, their father was diagnosed with cancer. I had known Steve for 20 years and believed he had done many unforgivable things. Nevertheless, he was homeless with terminal cancer. Although he fell short, he loved his kids. Inviting him to stay with us was the right thing to do.

A few nights before he came, I sat in my living room after everyone had gone to bed and wondered if I was making a big mistake. While I wrestled with the decision, Mother Teresa’s words challenged me. The kids – 11 and 15 years old – and their dad belonged to each other, and we needed to figure out how to bring peace.
Anger, then trust
Steve moved in and hated that he had to do this. He was very angry that he was sick. He was angry that he had to come live with us when he did not like us. But the biggest issue he was angry about was that his secret was out in the open, having come to the U.S. illegally in 1973. Because of this, he did not qualify for many medical services. Nevertheless, Hospice of the North Shore (now Care Dimensions) treated this man with compassion and respect. It took him time to trust his hospice team, but the caring and resources he received began to change his demeanor.

A few months after living with us, Steve came into the kitchen and told me that we needed to talk. He said, “You know that banner in the living room facing my bed? I read it every night. And lately I have been wondering about my friend ‘Mario’ (not his real name). We had a big fight a few years ago and have not spoken since. He is like my brother and I realize not forgiving him has kept me away from him. I have no peace because I forgot he belongs to me.”

As Steve spoke, he wept openly and shared the story of their separation. A few days later he decided to go see Mario, who owned a small grocery store. He returned with two big bags of groceries. Smiling from ear to ear, he shouted, “We belong to each other again!”
Forgiveness leads to peace
Steve lived with us for 10 months before he passed peacefully surrounded by love. A love that was free to behold because he remembered – then we remembered – that we belonged to each other.

Forgiveness is my letting go of my need to punish someone else and my desire to stop carrying around the hurt and anger someone caused me.

I am convinced that forgiveness at end of life can bring healing to the person who is doing the forgiving and to the person who is being forgiven. It can also impact the family and relationships beyond the family circle. Forgiveness demonstrates a precious model to those who are watching how we die.
About the author
Rev. Donna Spencer Collins, M.Div., is Pastor of the Phoenix Rising United Church of Christ in Groveland, MA, and a chaplain with Care Dimensions.
Posted by NHPCO at 8:30:00 AM