Children are not supposed to die. It flies in the face of expectations we have of the natural order.  And yet, it happens. Sometimes the death is sudden and sometimes it is from life limiting illness. As a hospice social worker, I had the honor of supporting dying children and their families. Losing a child can be particularly complex – in anticipating death, there is still a hope and wish for children to improve and endure. There are other avenues of hope in death, however, and it was a dying child and her supportive doula that helped me see aspects of hope even in the face of death.

Children, even when dying, are brave, vulnerable, and full of life, humor, and love. They are raw and real and openly share their thoughts and feelings, and are often more prepared for their death than their parents, helping to support and prepare family and friends.

One family I remember well had three adopted children, two of whom had terminal illnesses. They had fostered these little ones and endured the arduous process of adoption, combined with learning all the aspects of care their children would need, often through long hours of the night. One decision they made early on was to reach out to an end-of-life doula, who they heard about at their church just weeks prior to one of their children being referred to hospice. This decision ended up making all the difference for them.

Sam’s family reached out to doula Trish through a church connection, and were pleasantly surprised to learn that Trish was a volunteer with the hospice that would be serving their dying daughter Samantha. Trish was new to the hospice organization, but she was an experienced volunteer. She was in her twenties, studying to be a social worker, and had a vibrant and playful personality. She was a perfect match for Sam, age 6, who had a contagious laugh and a heart full of love.

One of the greatest benefits of having Trish as a doula was that she could spend a lot of one-on-one time with her. In my role as a hospice social worker, I often had a caseload of 35-60 patients at any given time, wishing I could be in four places at once and knowing I needed to triage. It brought great comfort to know that Trish was visiting Sam every day–playing peek-a-boo, coloring, singing and sitting with her as she watched Barney on TV.

Trish kept me informed on Sam and her family. One day, while watching Barney, Sam pointed to clouds and then gestured “sleep”. Trish realized that perhaps Sam had some awareness of spirituality or death and called our chaplain. He and I made a visit along with Trish, as she had developed the skills to communicate with Sam. It was at that visit when Sam pointed to “goodbye” and “Barney.” When asked if she was talking about heaven and sleeping, Sam became quiet and looked to Trish. She had a trust and familiarity with Trish that allowed Trish to read right away that Sam was needing help finding the words. Trish used the communication board and provided soothing encouragement. Sam then said “yes, I bye.” Even at her age, she seemed to know. We were amazed. We also asked if she wanted Barney with her for Heaven and she giggled and looked at Trish. Trish asked her again and pointed to some pictures as well. Sam pointed to Barney and smiled and Trish agreed that Sam wanted Barney with her when she died, and maybe playing on the TV. We used this conversation together to relay end-of-life wishes to the family and continued to work with them to plan for Sam’s death. Trish and Sam’s parents made a scrapbook and some memorial items such as hand and foot molds. They created a playlist of Sam’s favorite music to soothe her and to use for her memorial.

Sam slept often and progressed toward death. Though the team came together and surrounded the family with support, Trish’s presence was invaluable. She increased her hours, stayed with Sam so her parents could get a break, and continued to ensure Sam received comfort measures and helped the family track this. She supported Sam’s siblings by singing to all the kids together and playing guitar for them.

At the time of Sam’s passing, Trish was right there at her bedside, along with her parents, while Barney’s “I love you” song played and they held hands in reverence for this sweet and innocent life. It was a powerful and beautiful moment. Inside the pain and trauma and imperfections of life, Sam died peacefully and just as she wanted. The chaplain and I arrived at Sam’s bedside to provide comfort and prayer. Trish and I called the funeral home and helped prepare them for next steps. They wrapped Sam in her favorite blanket, tucking Barney under one of her arms, close to her heart, for her journey to the funeral home.

Sam brought us hope and bravery in the face of heartache and tragedy. In the same way, Trish entered this family’s life when they needed her the most, with an invaluable contribution of support and friendship. Trish and Sam’s relationship impacted the hospice team, reminding us of the value of the deep and meaningful care end-of-life doulas provide. 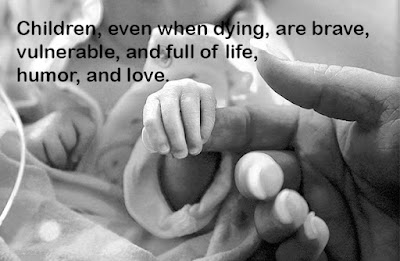 Jessica Curd, LCSW is a Certified Hospice and Palliative Care Social Worker (APHSW-C), at Our Hospice in Indiana. She is a visiting professor at Indiana University and is pursuing a PhD in Social Work there as well. She is an active member of the NHPCO End of Life Doula Advisory Council and is passionate about supporting and advancing the role of end-of-life doulas in Hospice and Palliative Care. Jessica lives with her family of 4 in Greensburg, Indiana.